“We recommend that you measure performance and cost on your own workloads when choosing your instance types.”

This raises an obvious question: how do these instance types fare for the big data workloads that our customers run? To answer this question, we compared the performance of AMD and Intel instances using two sets of benchmarks common in the big data space:

The rest of the post goes into the details of the benchmark setup, results therefrom, and conclusions.

All benchmarks were conducted using Apache Hadoop, Hive, and Spark clusters available on Qubole in AWS.

To minimize variables, we arranged each of the clusters with the following hardware configuration for our analysis:

All benchmarks have been run on clusters running Apache Hadoop 2.6, as available in the Qubole platform, whichuses Apache Hadoop YARN as the underlying container scheduler.

For this section, the following benchmarks were run:

These benchmarks are I/O intensive and involve reading/writing large amounts of data, which serves as a great example for a typical big data ETL pipeline. TeraSort is also quite CPU intensive.

First, we ran these with an EBS volume size of 100GB attached to each worker node (for both r5 and r5a instances). The resulting runtimes are noted below:

Clearly something was off with the r5a (AMD) cluster. Since TeraGen is not a CPU-intensive benchmark, the 25 percent performance differential on TeraGen is hard to explain. At this point we noted that r5a instance types have slower EBS throughput than the r5 instance types. To give the instances a fair comparison, we increase EBS volume size for r5a instances (relative to r5) and use this configuration for our subsequent benchmark runs.

Our summary findings for TeraGen/Sort are as follows:

We do not entirely understand how increasing EBS volume sizes helps here – except that IOPS/throughput scales linearly in response to EBS volume size. Given that EBS bandwidth is not saturated at these volume sizes – it suggests that IOPS/GB for EBS volumes is lower for r5a instances as compared to r5 instances.

The TPCDS benchmark setup is as follows:

In this benchmark, we ran Apache Hive version 2.1 running with Apache Tez — as available on the Qubole platform. All queries are submitted via a HS2 server. We first ran the benchmark with 100GB EBS for both AMD and Intel based instances — and then with higher EBS volume sizes for AMD instances. The results for our experiments are tabulated below:

In this benchmark, we ran Apache Spark 2.3 as available on the Qubole platform. All queries are submitted serially to a single Spark application (provisioned via YARN). The approach here is the same as in the first part. The results for our experiments are tabulated below: 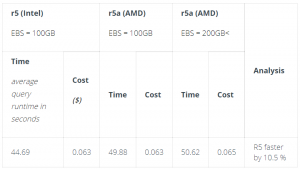 Our summary findings from TPCDS benchmarks are as follows:

So the net conclusion for Hive and Spark, in the context of TPCDS benchmarks, seems to be that r5 (Intel) instances are superior. They are generally always faster than the r5a (AMD) — and sometimes even cheaper (for a given performance level) at list price. However, there are some important additional points worth outlining that could affect the results:

For calculating cost of any benchmark run, we used the following formulae:

Below are the query categories and set of queries from each category that we picked for our analysis (with a total of 16 queries being chosen across all categories):