Innovate2Transform: AI & An Eye in the Sky Are Now A Solar Plant’s Favourite Aides 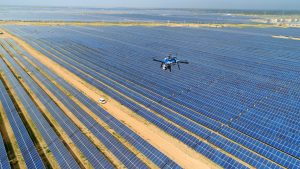 As the debate over environment-friendly power generation is getting stronger across the world, the myriad benefits of solar power are being widely discussed and rapidly implemented. Regions like Middle East, parts of East Asia and Europe are among the leaders now in deploying solar fields for harnessing clean energy. The global solar photovoltaic (PV) market is expected to witness a 25% growth this year, and 129GW worth new capacity will be installed. Asia Pacific appears to take up the largest share with 64% of installations this year. India is already among the top three biggest solar PV markets, behind China and USA.

With a total installed capacity of 8.3GW (as of 2018), India is ahead of European and Middle East nations, and will continue to be a key solar market in the future. A strategic and sustained push from the government through initiatives like National Solar Mission has led to an increase in the nation’s solar installation capacity and production quantities. By 2022, the country aims to install 100 GW.

Now, solar companies need to assess the importance of maintenance of assets for operational efficiency, reliability and productivity. Ideally, plants are designed to last atleast 25 years, and the efficiency of these plants depend heavily on Operations & Maintenance. With solar plants spread across thousands of acres of land in remote areas, monitoring solar assets to optimize operational efficiency and measuring reliability is an extremely labour and time-intensive activity.

After initial prototyping and validation in March 2018 with a leading renewable energy producer company in India, 14W Technologies conceptualized the need for an AI-based image analytics software and a customized drone solution for digitalization in solar PV performance evaluation and improvements.

The solution, called AirProbe, assists solar PV developers, asset managers and operations heads to digitize their PV assets for performance assessments and provides actionable insights in yield improvements.  Developing a hardware-based solution for each module or array was turning out to be expensive solution for Indian solar PV market.

That’s when the founders thought – Rather than installing thousands of sensors on ground, why not take a single sensor and move it around the entire plant using a drone?

Using AI-based analytics software and any third-party drone, the team can optimize performance and increase reliability of large-scale solar plants with reduction in time by 80% compared to present conventional methods. This has helped save costs of nearly 40%. The extensive database of drone data correlated to performance parameters of the asset, helped the team in zeroing down the root cause of under performance to the exact module and allowed them to suggest measures for energy generation improvements and preventive maintenance operations.

Within 15 months of operations, AirProbe has improved about 2.5% of energy generation for about 3 GW of PV assets worldwide providing additional generation to about 1.25 Lakh urban households every day.

India has some of the biggest solar parks located in Rajasthan, Andhra Pradesh & Karnataka. The quantum of solar PV capacity installed has scaled up in gigawatts. Installation of large-scale utility power plants involves months to year-long project activities for operating at optimized performance for a period of 25 years. With a tight schedule for commissioning and with multiple parallel activities, project teams usually are hard-pressed for time to commission the project and derive performance metrics.

Moreover, the entire plant needs to be inspected to claim insurance on damaged modules In addition, ramping up generation to maximum capacity typically takes 1.5 months for a 100 MW plant.

AirProbe collaborated with the Bhadla Solar PV Park project team to devise a solution that can streamline different activities and field inspection for a 200MW+ PV plant. Having an eye in the sky and AI-based software helped the PV power plant stakeholders detect under performing modules, disconnected arrays, damaged modules and prioritize areas requiring grass cutting and cleaning. It could also detect subtle faults, which would have otherwise gone unnoticed had the plant operators resorted to conventional methods. Streamlining and prescribing activities to be undertaken helped the project manager prioritize activities to ramp up the generation and guarantee the maintenance teams and investors for the quality of installation. Additionally, detecting and replacing the cracked modules following a single aerial inspection helped increase the plant availability drastically.

AirProbe’s participation in project phase of this PV site reduced the time to stabilize by two months with an improvement of 3-4% in pin-pointing installation errors and inefficient PV modules.  The developer for this project could gain Rs. 0.5 crores of financial growth during its stabilization period along with improved green energy generation.

O&M of a large-scale solar plant gets complicated especially when the yield of the plant is low, and the root cause needs to be uncovered. With a plant’s operational life being 25 years, modules could get damaged during grass cutting, tilting or acts of nature like lightning and hailstorms. Further, the modules generally degrade with time and is important to pick out the modules degraded beyond the warranty limit in order to ensure optimisation of plant performance.  However, the most difficult scenario is when a significant number of panels might be underperforming, and identifying these panels is a difficult and time-consuming job.

Potential Induced Degradation (PID) is one such phenomena causing this and is important to identify PID in early stages for it to be reversible – similar to cancer in humans. AirProbe helps in 100% inspection of the solar modules spread across hundreds of acres and can identify PID in early stages, thanks to our advanced image processing algorithms. One of the projects was affected by early stage PID and the team found that about 5% of modules had anomalies resulting in 7-8% of underperformance. Using traditional methods to identify all the affected modules takes months whereas with the AirProbe solution, it took just two days – one for data collection and another for automated analysis and reporting. The solution also helped the O&M head strategize the next list of activities in order to optimize plant performance along with getting a complete view of how the plant was functioning. This also helped in planning the reversal of PID at earlier stages, which would have otherwise led to 20%-40% decrease in power.

AirProbe was honoured with Nokia Start-up Innovation Award in November 2018 for its contribution towards optimising energy generation using digitalization for renewable energy assets.

This is part of our ongoing series Innovate2Transform, where we bring to you the leaders of the industry talk about the latest in innovation, technology and trends in their industry sectors.

If you want to contribute, write to sindhuja@nasscom.in.