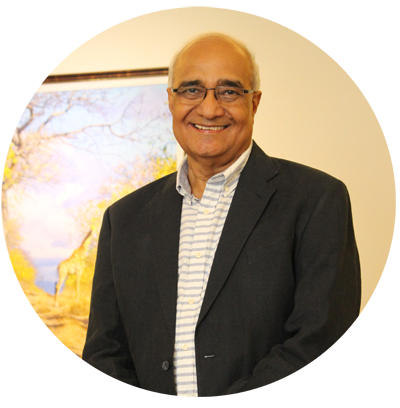 The company that dominated the industry until 1980s was IBM. The whole world moved around IBM’s vision of computing power, of faster computers. And when I joined TCS in 1981, the world of computing also changed, with the advent of the likes of Apple, IBM PC, and Microsoft. I was fortunate to have a leader like Dr. F. C. Kohli at TCS. We will all agree that he set the defining tone and context, not just for TCS but for the entire Indian IT industry. Under the leadership of Mr Kohli, we were able to experiment with multiple business models, and even developed successful products that could build huge consumer connect. Examples like Masterkey in the 1980s stand in testimony.

While products empowered the consumers, the only problem we discovered, later on, was that the development cost was only 20%, the rest was marketing, a notion that was alien to a efficiency-centered risk-averse business model like ours. As we moved on, the computing landscape also changed, the only thing that remained constant though was the emphasis on utilization of computing power, which has consistently grown all these years and from large mainframes to monolithic computers, it became distributed, basically the ability of two computers talking to each other.

During the ’80s and 90’s the Indian IT industry chose well to remain in the conventional information technology space. The acceptance of India as a destination can be attributed to the evangelization and networking made by Dr.Kohli, which clearly acted as a springboard for larger things as we moved ahead.

I ended up spending 18 long years in TCS, the best part of my younger life was spent there. As I reflect back at those years, I wonder why a person like me with an adventurous mind, chose to stay in one company for so long. The answer probably lies in the spirit of entrepreneurship at TCS that gave me ample headroom to grow the company across services, geographies and technologies.

I left TCS in 1998 and joined International Computers India Ltd (ICIL) as the President and CEO. ICIL subsequently was renamed Zensar Technologies in 1999 and I headed their global operations until the time I founded Nihilent in 2000. It is worth mentioning that during my stint at Zenzar, it achieved the unique distinction of being adjudged at SEI-CMM Level 5, the highest Capability Maturity Model and the first Indian IT company to be appraised at Level 5 for its enterprise-wide delivery capabilities.

One thing that kept me moving forward is my dream to create a differentiation in the industry, to create a new generation business consulting organization, which helps enterprises translate their vision to a reality. It is in this backdrop Nihilent was conceived. The idea of starting something from zero or nothing.

From the year 2000 to what we are today, the nature of IT has significantly changed. In the initial days it was seen as the productivity tool, and later on a key driver for process efficiencies and the biggest disruption happened when computers and communications converged to create the Internet, everything changed. Disruption is a mindless everyday word in our vocabulary today, isn’t it.

To respond to the challenges and opportunities brought by the convergence of computing and communications, we started to visualize its impact on businesses quite early on. During this time a lot of industries were facing their existential crisis, technology was no longer just a process efficiency tool, it had to play a larger transformative role. It has had a major effect on all the industries, as it disturbed the existing processes in a big way and called for a cultural transformation.

In this backdrop we saw the need that for any technology implementation to successfully transform the business, we need to factor in people and processes and blend it with technology, just what our change management framework MC3 (MC Cube) focuses on delivering.

There was a felt need among the customers for systematic change management. It is in this context we reached out to a few of our trusted customers and it resonated very well with them. With a heightened level of conviction, the MC3 became the very DNA of our thinking, a cohesive abstract framework to bring about change, the first and the essential step.

Riding the Wave of Experience Economy

I would say between 2000 and 2010, even though the computers got connected and went into the hands of the people, the enterprises made advances only through a hit or miss push approach. For instance, they will design a product sitting at their offices that they think will work in the market, with some clever advertising and marketing.

But from 2010 onwards due to the behavioural change of the consumers across the world,    enterprises started feeling the pinch, transformation was no longer a luxury, but a necessity. More importantly, enterprises loathed the idea of becoming a one-hit wonder, and started to revisit the abstract model of their business. Creating an abstract model of businesses is vital to understand the risks, opportunities, and sustainability, lest you face the risk of losing out to a competitor who would drop from nowhere.

Therefore, early in the game, Nihilent worked to understand the needs, wants and aspirations of our clients and well as their customers. We quickly built a healthy set of capabilities, for instance, our patented framework, the 14 Signals, decodes what constitutes customer loyalty. Prolicy-D, another homegrown framework, which builds upon the customer insights we generate, guides the design of digital products and services. From the early days, we oriented towards the thought that unless you dissect the human psyche, relevant solutions or services cannot be made. We need to study humans as an emotional being, with influences, aspirations and dreams, seeking memorable life experiences. To enable this human-centered perspective on a cultural basis, Nihilent adopted Design Thinking in a very big way and made it the centre-piece for creating solutions.

The logic stems from a strange irony that while the humans are called rational entities, yet our 90% of the decisions are taken at an emotional level. So clearly, we need to factor in those emotional elements in the solutions we deliver. So, for a technology company, it is not just enough to be technology experts. Understanding the customer is vital and every industry is risking their business if they are not refreshing their old model for one that is responsive to the harsh realities of a connected experience economy.

The point is, it would be wrong to say that customers were never studied and analysed. There are a number of respectable companies who are doing a wonderful job, but banking on traditional feedback mechanisms, like asking the customers about the feedback, which fetches socially acceptable answers largely. So, there is a fallacy within the process itself.

It is in this backdrop we said that we have to create an environment where the person is free express themselves in a way that suits them, and we become the active listener. This is what the lab does. You pool in the users and trigger questions relating to their expectations and experiences. It’s a blend of verbal and non-verbal approach that measures the intensity of their interaction and influences. We leverage concepts like emotional analytics, facial recognition and other technologies that measure the emotional elements of the users. This is very important, as the designer must know not just the user’s context and mindset but also environment in which the products and services will be used.

The lab creates a design awareness leading to the co-creation of innovative products, speaking directly to not just the articulated but also the un-articulated needs. Through conscious and scientific design of interactions we deliver meaningful Interaction-experience. Interaction-experience lab brings in a higher degree of customer connect and as they are the nucleus around which we build your relationships. In the end, we should know that only the best customer experience wins, no matter who makes it.

The Rock Stars Who Shapes My Thinking

I have been a student of existentialism and the abstract thinkers like Jean-Paul Sartre, J. Krishnamurti to Osho have influenced me. I also listen to a lot of Podcasts. Since I was also trained officially in scriptwriting, I visualize human interactions. I am a big fan of Peter Drucker, who said way back in the 1980s that the “Business is nothing but the customer.

Two things are required going forward. There is no option but we will need high quality engineers. When I say engineers, I mean the engineering approach and mindset to looking at problems, dissecting them, going to the bottom-most molecule and understanding it. More engineering and R&D mindset that is the need of the hour.

Having said that, the other key factor in this context is empathy, for instance, right-brained people have a fantastic ability to empathize, and what it means is that you drop your ego and look at things from the customer point of view.

It is true existentially. If I want to look at the abstraction of the business, unless I can drop my pre-conceived notions about the current models which are successful, I will not be able to imagine and design a fresh abstraction which will be futuristic. You can do this well only if you have empathy. There is a need to continuously experiment and stay at the bleeding edge of technology, but in a way that will help play a larger societal role.