The global Fintech market was valued at about $127.66 billion in 2018, and is expected to grow to $309.98 billion at an annual growth rate of 24.8% through 2022. Growth in the digital payments sector is driving the market for global Financial Technology (Fintech).     Not just this but to check out the fact that as of now we can see that E-Commerce is rapidly increasing across the globe, impacting the FinTech market positively, is finally estimated to grow with a superlative CAGR of 10% to 12% through to 2025.

What industry experts has to say?

Jack Ma, the market leader of Alibaba Group observed that 10 times more wallet subscriptions were made and 13 times more average number of transactions daily increased in 2017 as compared to 2015.

In March 2019, Cognizant acquired Dublin based financial software company Meritsoft so that revenue can be increased.  And in the same month, World First acquired the Australian CurrencyVue firm to build a global platform. And it is stated that more and more mergers and acquisitions will be poised so that Fintech technology can give profits to various companies.

As per CB insights, Fintech market share across 48 Fintech unicorns is worth over US$187 billion as of the first half of 2019, or slightly over 1% of the global financial industry which will tend to increase later in the years.

According to Accenture’s report, Fintech reached US$55.3 billion in investments in 2019. To this figure, China contributed a total of US$25.5 billion, of which more than half (US$14 billion) is from Ant Financial of Alibaba Group, known for its Alipay mobile payment service. 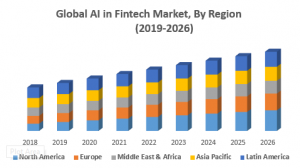 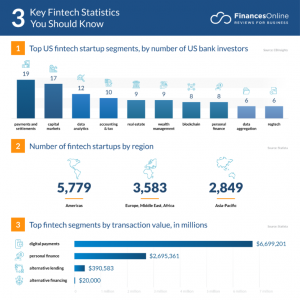 The rate at which the Fintech industry is growing, is a good news for the financial and technical sector both. Financial services, however, are inching closer to a revolution that’s akin to the wheel like if once finance and technology become inseparable, it will be overwhelmingly hard to imagine a time when they are mutually exclusive and competing for the same space. The radical transformation of the financial services industry through Fintech disruption is still underway.

Palak Bhatnagar is a student , pursuing PGDM in Finance and Business Analytics at New Delhi Institute of Management , New Delhi . She is a finance enthusiast , a versatile person who likes to explore . She is a keen learner with an objective to learn and grow.