Leading cybersecurity training organization SANS Institute (with which ARC announced a partnership earlier this year) has just released the results of its 2017 Threat Landscape Survey. The survey has an enterprise-wide scope, and many of the respondents were from the world of IT, government, and finance. It provides an excellent overview of the top cybersecurity threats facing organizations today and their impact. SANS uses the following definitions for threats, threat vectors, and incidents: 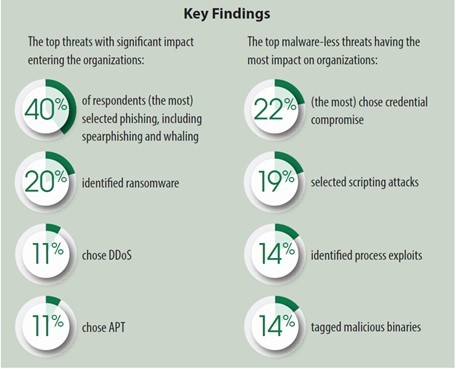 Both SANS and ARC Advisory Group see malware-less attacks as an increasing threat that is growing in scope and sophistication. Leading malware-less threats included credential compromises and scripting attacks.

The survey goes into more detail regarding areas like the most surprising threats (there is a lack of visibility into unknown threats), threat vectors, impact of threats, threat response and mitigation, and much more. Perhaps most interesting is the roadmap discussion and where future investments will be made (hint: training is critical). You can read the entire report, written by SANS mentor instructor Lee Neely, here. SANS also did a two-part webcast on the results of this survey, and you can view the archived versions of Part 1 here and Part 2 here.

“Reprinted with permission, original blog was posted here. You may also visit here for more such insights on the digital transformation of industry.

For further information or to provide feedback on this article, please contactakanagali@arcweb.com