Digital Technologies at the forefront of IP creation

The European Patent Office recently released its patenting trends for 2019, highlighting the increased innovation in the area of digital technologies across countries in turn indicating the next wave of the global economy’s digital transformation.

Some key highlights for 2019 included: 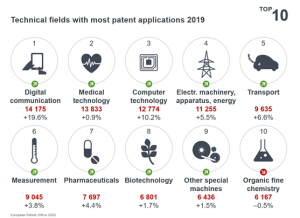 …And US maintaining its innovation leadership

Last year NASSCOM released its study “Emerging Technologies: Leading The Next Wave of IP Creation For India”, which highlighted that the share of emerging tech patents filed by India domiciled companies in the US have witnessed consistent growth crossing the 50% mark in 2017/18, with AI being the leading emerging technologies for patent filing.