Rising population is a big challenge across the globe, as it continues to put more pressure on natural resources that we have. The global population is projected to reach 9.7 billion by 2050. India is expected to surpass China as the most populous country by 2027. This population expansion will be primarily driven by growth in the urban population. More than two-thirds of the world population is expected to live in cities by 2050, from a little over half of the population currently.

The story in not different in case of India which is expected to be home to over 1.7 billion people by 2050. 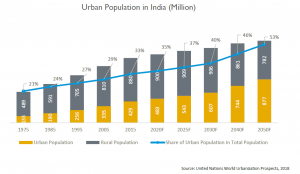 This rising population which is skewed more towards the cities continue to drive the urban sprawl, which in turn is increasing the average distance travelled by a commuter. Notably, New Delhi has been witnessing one of the fastest urban expansions in the world, and is set to become the world’s largest megacity by 2028. 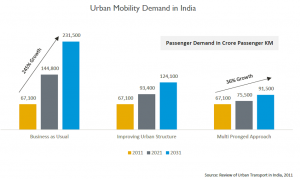 This need for increased travel distances coupled with easy financing options is increasing the number of private vehicles on the road. 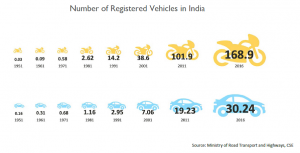 This increase is severe on the two-wheeler front considering the unreliability and poor quality of public transportation across most Indian cities. The disappointing fact on the public transport front is that India has just 1.2 buses per thousand people – A statistic which is quite low even from developing nation benchmarks.

The convenience, cost advantage, and easy ownership of private vehicles in the country are preventing even improved mass transit systems like metro rail to clock the targeted ridership as commuting time remains a challenge their specially for shorter distances owing to improper planning coupled with a lack of last-mile connectivity options. Though a number of startups such as Mobycy are bringing new solutions to solve for last-mile there is still a very long road to cover.

Overall, this unstoppable increase in private vehicles is leading to a number of problems from traffic congestion and pollution, to parking challenges and freight inefficiencies. In order to solve for these issues there is a need for technology solutions and collaborative efforts from all stakeholders.

Check how technology can solve for these urban mobility challenges in our report “MAKING URBAN MOBILITY SUSTAINABLE, SEAMLESS AND SAFE”