DSCI – Building Trust in the Cyberspace for more than a Decade

It’s 2008 and the Indian IT industry has become a global powerhouse crossing 150 billion dollar mark in revenue, employing more than 3.5 million people. Despite the euphoric growth coupled with incredible opportunities, data security emerged as a rising concern for India and a profound need to emerge not only as an efficient partner but also a trusted one was getting echoed all over. This led to the creation of DSCI, by NASSCOM, as a not-for-profit focal body to promote security and data protection.

In the initial years, best practices, frameworks (DSF, DPF) and guidelines were developed on security and data privacy which were sensitized through an expansive awareness drive in the shape of conferences, including knowledge dissemination through reports.

The aspect of capacity building was carried forward by creating chapter communities, training the Law Enforcement Agencies and handling cybercrimes in the country. The setting up of Cyber Labs at various locations is worthy of a special mention.  Along with, DSCI also came out with certifications such as DCPP and DCPLA to skill individuals on privacy and enable them to be industry ready.

With increasing digitization, proliferation of Internet-based services and connected businesses, new threats such as cyber-attacks, data breaches started emerging. The threat landscape was increasingly getting worse and the entire world started worrying about Cyber Security. Cyberspace became the fifth domain for National Security after land, sea, air and space. Beyond the mandatory framework of national security framework, countries started to engage more extensively to fight the common enemy – cybercrime.

India being no different, the need was felt to bring the public and private sectors together to deal with cyber threats, and a Cyber Security Advisory Group was established which published the seminal report ‘Securing our Cyber Frontiers’ in 2012.  Additionally, the release of National Cyber Security Policy in 2013 added impetus to the growing need of addressing cyber concerns. 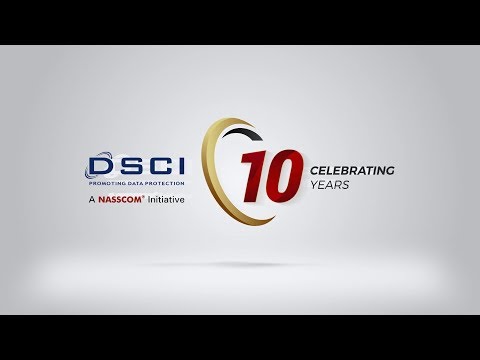 Data Protection as a discipline continues to emerge stronger and DSCI has persistently brought up privacy issues into the mainstream to elevate the level of awareness in the country. Particularly noteworthy being, the DSCI Privacy Framework, DSCI Assessment Frameworks, Industry Preparedness on GDPR, etc. A special mention is DSCI’s role in the draft Data Protection Committee which has come out with the Personal Data Protection Bill 2018 and India’s Data Protection Law might soon see light of the day.

Upon the Hon’ PM’s recommendation, NASSCOM & DSCI constituted a Cyber Security Task Force in 2015. The task force envisioned growing the Cyber Security Industry to USD 35 billion by 2025 having 1 million cyber security professionals and over 1000 start-ups. To fulfil it, DSCI has undertaken a comprehensive charter towards Industry Development.

The future withholds its own set of complexities! Emerging technologies such as Artificial Intelligence, Blockchain, Machine Learning, Internet of Things, etc. are further reshaping the security and privacy paradigm and DSCI is delving into such realms from a security standpoint.

One thing remains common. After 10 years of sustained excellence, DSCI continues to expand its role as a think tank for cyberspace and ensure it remains Safe, Secure and Trusted, particularly from our nation’s standpoint.